Qur'an is a Heavenly Book revealed to the Holy Prophet (PBUH) for the guidance and salvation of the humanity. Therefore, the verse discusses the rationale and the importance of making parable in the Qur'an. Interestingly, all the Quranic parables are aimed at guiding his audiences to the right path.
Code news: 23 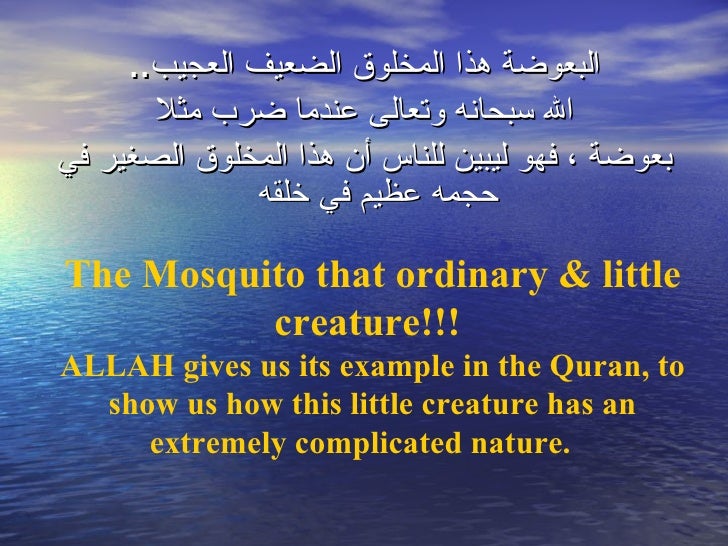 "Allah does not disdain to set forth the parable even of a gnat, or anything greater than that. As for those who have Faith, they know that it is the truth from their Lord. And for those who reject Faith, they ask: 'What does Allah mean by this parable?' Thereby He leads many astray and guides many, and He leads none astray save the transgressors". (Qur’an 2: 26)

The purpose of a parable is to make the meaning of an abstract idea more clear and explicit with the help of a material thing in order to assist the mind in catching the idea through consideration. The more man's wisdom is dependent on his base understanding, the less vigorous strength he has to conceive the spirit and reality of things when his imagination interferes.

That is why that in the Divine Book and in the words of the wise and men of letters, the essence of meanings are stated in the form of parables to make complicated concepts plain, hence through a logical thing find a way to the philosophical.

A 'gnat' is a small insect, which is perceptible by the naked eye. Gnat is mentioned in this verse, perhaps, to show that striking a similitude between small things or beyond it, is not inappropriate for the Glorious Dignity of the Essence of Allah. But to confirm that the proportion of His Sovereignty is the same over big or small, high or low and, in general, all are encompassed by His Power and are benefited by His endless Mercy and Grace.

Furthermore, if we observe carefully, we will see that all the creatures, whether complex or simple are linked to one another like a chain. They are so interrelated and perform their duties with such surprising harmony and regularity that it is as if they have formed a single unit to take part in a general service.

The term 'gnat', in this verse, may refer to the greatness and fairness that is used in the creation of a gnat, this very small creature.

Concerning this meaning, there is a tradition from Imam al-Sadiq (as) who said:

"Verily, Allah (s.w.t.) has set forth a parable of a gnat because He has created 'gnat'. With that small size it has, consisting of all that He has created in an elephant' with that bigness it possesses, and He has added two other limbs (for gnat) in order to stimulate (the attention of) the believers to notice the delicacy and frailness of His creation and His wonderful production."

"...As for those who have Faith, they know that it is the truth from their Lord..."

Those who have believed in Islam and accepted the Word of Allah know that these miraculous statements are issued from the Origin of revelation. They know quite well that these parables are vivid and appropriate and are revealed from their Lord. They conceive the fact in this way because their hearts are empty of envy, grudges and pride and their souls are the site of the light of illumination and knowledge.

Those who have disbelieved and covered the light of Faith with the curtain of infidelity have ultimately blinded their own insight. They have made their ears, which were able to hearken to the Divine Words, deaf. They, ignorantly or mockingly, inquire that what was Allah's aim by giving this for a similitude that He causes many to err by it and many He leads aright.

In Tafsir-ut- Tibyan, vol. 1, page 19, Shaykh Tusi says: " It is like that a speaker asks what Allah means by this parable that thereby some may be led astray and some be guided. In answer to this question, Allah says that none will be led astray save the transgressors; but the way is open to the believers to reach the climax of understanding and conception with knowledge and true Faith."

Occasion of the Revelation

When the previous verses, i.e., the verses that say: "The likeness of them is as the likeness of a man who kindled afire..." and" Or (their) likeness is as a rainstorm from the heaven...", (2:17,19) were revealed, the hypocrites said that Allah is much exalted to bring forth these parables. So, to refuse their guise and statements, it says:

"Allah does not disdain to set forth the parable even of a gnat or anything greater than that."

Some commentators have cited their ideas about the verse under discussion as follows:

The Arabic term / yudillu / means: 'misleading'. Wherever this word is used in the Qur'an, relating to Allah, it means the withdrawal of His Grace and allowing the individual to have the way of his own choice as a punishment, consequent to the individual's rejecting the Divine Guidance voluntarily offered to him.

The Holy Qur'an presents the justification to the frequent metaphorical expressions in the form of parables, to stimulate the human mind and heart. The result is obvious: that a healthy mind grasps the Truth whereas the perverted mind increases its doubts as to what Allah meant by the parable. Thus, the one and the same expression has two opposite effects.

The right impression is 'guidance' / hidayat / which is assigned to' the pious' /muttaqin/, and the wrong impression is /dalalat / 'going astray' which is allotted to the wrongdoers, and pointed out in the next verse.

The two important characteristics of the wrong-doers are: the breach of the Covenant of Allah, after it has been confirmed and /qata'a ma amarallah / i.e., the severing of the relation or the connection with what Allah has commanded man to establish, and doing things subversive and harmful to the harmonious life on earth.

X
Error Report
back to up
Comments